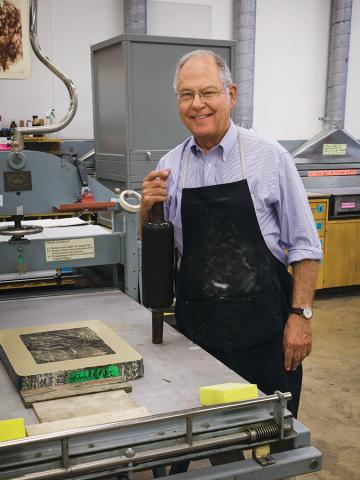 I had the opportunity over several summers to travel to England with the Baylor-in-Great-Britain program. While my wife was teaching British Literature, I worked every day on my professional print images in the London Print Studio on Harrow Road. One evening toward the end of our first summer there, one of our colleagues in the Business School accosted me as I carried my big portfolio and backpack to the Imperial College cafeteria for dinner and asked, “Hey, Berry, what do you do all day?” When I told him that I drew images to make prints from, he said, “like, can you draw that tree over there?”  So the next year that we went on the program I decided that although it was not along the lines of my professional work, I would make a gift to my faculty colleagues in the program of an etching that would represent our shared experience in Great Britain (and show them what I was doing all day!).  Since these prints have never been publicly exhibited, I thought this Retirement Exhibition would be an appropriate place to share them.

I am interested in ruins of all kinds (my prints often suggest landscapes populated with sticks, rocks, debris), and in Great Britain castle ruins fascinated me—not fully restored and redecorated castles, but the imperfect remains of often magnificent structures, victims of time, the elements, and sometimes even deliberate destruction.

On an extended weekend each summer after that first year, then, my wife and I visited a town or area in England or Wales that had castle ruins that we had heard about. I made on-site sketches as well as extended on-site drawings and many photographs, getting to “know” something about the site and vantage points. Back at London Print Studio I worked from the reference drawings, creating and editioning a print to share with my eight BGB colleagues.

In 2011, on a free weekend, we traveled to Dorset to see Corfe Castle, begun by William the Conqueror in 1066 and added to by other Medieval kings. Unlike many castles, it was built on a hill and had one of the largest towers in southern England. Corfe remained a royal castle until Elizabeth I sold it, and the private owners during the English Civil War continued their loyalty to the Royalist side; in retribution, in 1646 Parliament had the castle demolished by planting gunpowder under walls and towers. The castle ruin I drew was the result of this destruction coupled with the effects of time.

In 2013 we traveled west to Wales to visit Snowdonia National Park, looking forward to riding the narrow-gauge train up Mount Snowden. What we discovered walking past the parking lot was a rather small round castle almost hidden in the woods: Dolbadarn Castle, built in the early thirteenth century by Welsh prince Llywelyn the Great. He was defeated by English king Edward I in 1283, and the castle no longer served as a symbol of Welsh power.  It has been a ruin since the eighteenth century, majestic in its simplicity.

On a Sunday afternoon in 2014 we took the train to Rochester, just an hour east of London, to see what one castle authority described as the “great tower at Rochester[which] is in fact the tallest great tower in Europe.” Unfortunately for us, there was a concert in the central area of the castle, and all the entrances were closed. So we walked around the castle, took photographs, and dashed back to the station in a pouring rain. The main impression of this grand castle was as a silhouette, which suggested my approach to creating the print.

In 2016, on a recommendation from Jeff Hamilton in the History Department, we journeyed to Yorkshire to a castle whose owner he had studied for his dissertation—Knaresborough Castle. Built around 1100 on a cliff above the River Nidd, this castle was repaired, expanded, and decorated by both Edward I and Edward II in the early fourteenth century to become “a work of unparalleled splendour.” A royal residence, this castle, like Corfe, was taken by Parliamentary forces in the Civil War and destroyed by Parliamentary decree in 1648. Its ruin is owned by the British monarch and is the dramatic centerpiece of a public park in Knaresborough, with bowling, putting, and concerts on the grounds.